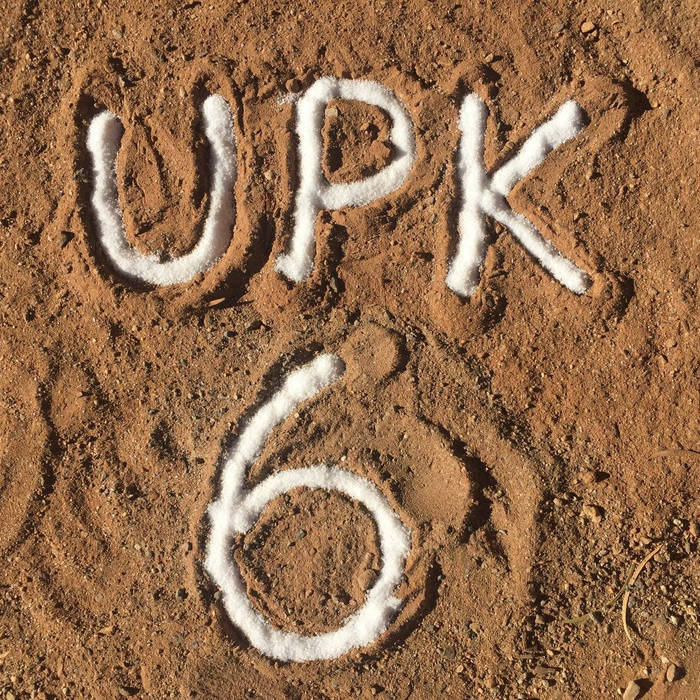 UPK 6 is dedicated to the memory, in the first part, of Roger (Kunmanara) Kayapipi who established the camel enterprise at West Bore. He was a renowned and respected man of high degree. His many achievements, his traditional standing and the rich history of West Bore made it a perfect, central location to capture music from the PY Lands.

Uwankara Palyanku Kanyintjaku UPK (Translated Pitjantjatjara: ‘Everybody
creating and holding our future’) music recordings began in 1989 at Mutitjulu and have been enriched since that time by the contribution of many music heroes. In particular from Amata, Watinuma and Fregon we acknowledge the inspiration provided by Amos Lennon, Warren and Victor Tunkin, Lee Brady and the driving influence of Wedgetail Eagle Band and Ilkari Maru.

Every UPK recording has been made in a remote bush location, away from the distraction of everyday life. All the equipment, instruments and materials are transported to the chosen site. Musicians from communities right across the PY Lands arrive and work on their songs. For two weeks musicians combine in support of one another to write, produce and record songs that relate to the theme of UPK.

The theme of UPK6 was waste. ‘Waste’ in terms of the physical by-product of our lifestyle and ‘waste’ of life and opportunity. In particular UPK6 highlights domestic violence and bullying but it also scopes our world for visions of what makes a good life. The musicians of UPK6 came from different communities across the PY Lands turn by turn; they wrote, performed and recorded their songs in two or three days.

They have an implicit understanding of what ‘UPK music’ is; they have all grown up with UPK songs being the most popular, many have fathers and uncles, even grandfathers who have played on previous UPK recordings.
UPK is a rationale underpinning the strategy used by the regional health body, Nganampa Health Council (NHC). Beyond the many aspects of physical health including clinical care Nganampa Health recognizes the multiple non-physical elements affecting wellbeing. A sedentary lifestyle, unemployment, poor education, peer pressure, social media pressure and poverty are all challenges that contribute to depression, anxiety, blame, anger, violence and the malaise of apathy influencing the lives of contemporary Anangu.

The production of UPK6 has had the active involvement of the tri-state
Ngaanyatjara, Pitjantjatjara, Yankunyatjara Women’s Council (NPYWC) who dedicated human resources, vehicles, trailers and a mobile barbecue trailer to the project. The social and cultural charter of the NPYWC is commensurate with the goal of Nganampa Health Council to achieve wellbeing on the PY Lands.
The songs of UPK6 reflect these issues and aspirations. NHC has long committed to using radio and television, the expressive arts and
particularly music to illuminate, educate and inspire listeners and viewers towards realizing the vision of good living, to see the power of changed minds.
UPK6 was made possible with funding from the South Australian Government Department of Planning, Transport and Infrastructure (DPTI) and its the Office of Local Government. In particular Stuart Sturgess must be acknowledged for his advocacy and initiative.

Bandcamp Daily  your guide to the world of Bandcamp